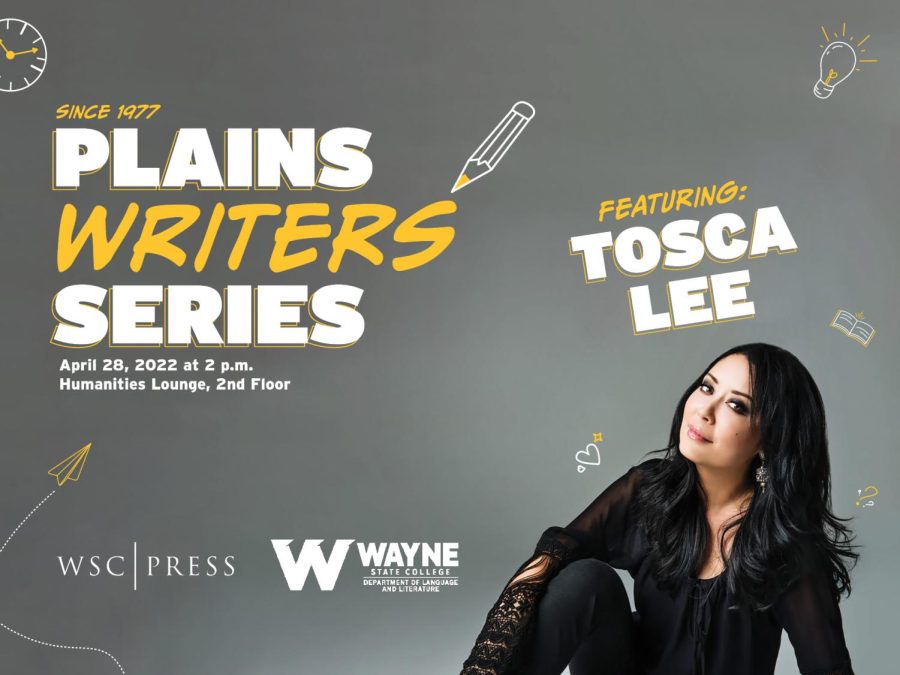 Wayne State College’s Language and Literature Department, the School of Arts and Humanities, and the WSC Press are pleased to hold this Spring’s Plains Writers Series on Thursday, April 28, 2022. The Plains Writers Series is held several times a year to bring attention to the prose and poetry of Great Plains writers through reading and interacting with area audiences.

This Plains Writers Series will feature Tosca Lee, the New York Times bestselling author of The Line Between, The reading will begin at 2 p.m. in the lounge on the second floor of the Humanities Building at Wayne State College. This event will be live-streamed on the Plains Writers Series Facebook page.

Following the Plains Writers Series will be the Fiction Slam. The slam will be held at the Max Bar and Grill in downtown Wayne, NE starting at 7:00 p.m., with registration beginning at 6:00 p.m. Slam participants need two short fiction pieces and $5 registration fee. All events are free and open to the public. For more information, please go to wscpress.com.

Tosca Lee is the New York Times bestselling author of The Line Between, A Single Light, The Progeny, Firstborn, The Legend of Sheba, Iscariot, Havah: The Story of Eve, Demon: A Memoir, and the Books of Mortals series (Forbidden, Mortal, Sovereign) with New York Times bestselling author Ted Dekker. Her work has been translated into seventeen languages and optioned for TV and film. She is best known for her nuanced prose, unexpected points of view, meticulous research, and high-octane thrills.

Lee is the recipient of numerous awards including two International Book Awards, Killer Nashville’s Silver Falchion in Science Fiction (beating one of her own books for the win), Literary Titan gold, Top Shelf Magazine Editor’s Choice Award, and the ELCA Book of the Year in Fiction for her portrayal of the infamous betrayer of Christ in Iscariot, which Publisher’s Weekly calls “impeccable and masterful.” The Legend of Sheba was a finalist for the same award the following year. In addition to the New York Times, her books have appeared on the IndieBound, Amazon, iTunes, Barnes & Noble, and inspirational bestseller lists, Library Journal’s Best Of lists, and as part of Target Stores’ “Target Recommends” program.

Called the “queen of psychological twists,” and “in a league of her own,” Tosca’s work has been praised by Publisher’s Weekly, The Historical Novel Society, Kirkus, Booklist, Woman’s World, Romantic Times, BookReporter, BookRiot, The Dallas Morning News, and The Midwest Book Review as “deeply human…” “powerful…” and “mind-bending.”