Interviewed by Jen Ippensen - May 2020 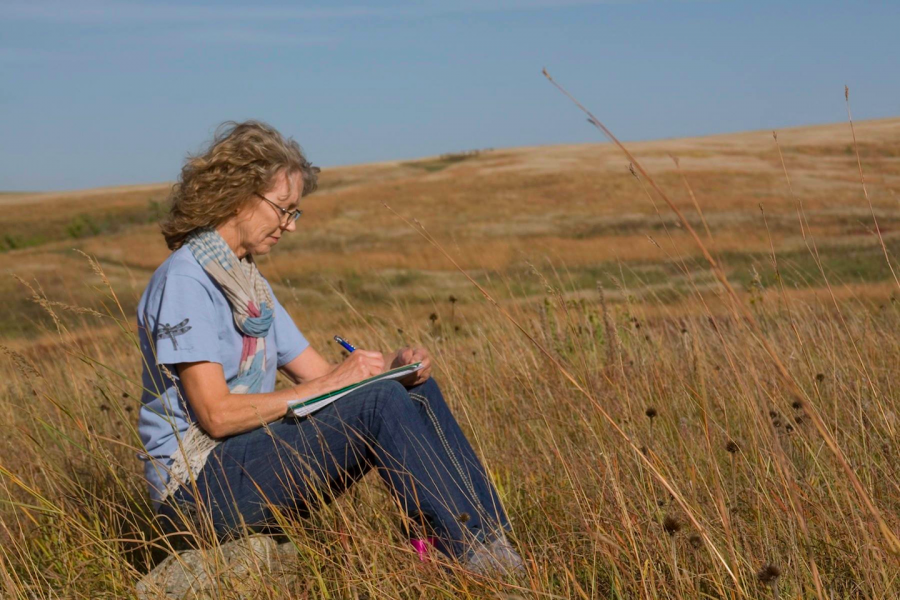 How did you get started writing poetry?

In the early 1980s, not long after I began employment at Nebraska Wesleyan University as a horticulturist, I enrolled in a poetry-writing class taught by the late great Nebraska State Poet Bill Kloefkorn. I had never written a poem before, but I’d read Kloefkorn and Ted Kooser’s duo poetry collection, Cottonwood County, and was intrigued with the way they used ordinary subjects to make art with words. I did not stop writing after the class ended.

Do you have a routine associated with writing that helps you in your creative process?

Mostly I write in the morning while drinking coffee, but my process is enhanced the rest of the day by reading, observing nature, and physical exercise. Each time I sit down, I think of it as practice writing, and sometimes I get lucky.

Do you aim for a certain number of words or set another kind of daily or weekly goal for yourself?

A regular writing practice works best for my mind well-being, same as my regular yoga, walking, and workouts are best for body well-being. I do not set daily/weekly goals, but I believe in deadlines and balance. When life gets in the way of writing, I do not obsess about it because in my experience, I know the writing will be there when I return. I go through times when nothing seems to work, and others when everything is poetry to me, so I’ve learned you just need to keep at it.

What role does reading play in your writing life? And what have you been reading recently?

Before I try to write, I read most any kind of writing to fill my head with words—books or magazines and also read poems online like Writers Almanac, Poetry Daily, and Rattle. I greatly admire the writing of Mary Oliver, Joy Harjo, Marge Piercy, and of course, so many others including poets who write very differently than I do. A writing teacher once told our class that originality in art is an amalgam of influences. So, I say, welcome all the influences you can find.

What advice would you give aspiring writers?

Read, read, read, and write, write, write! Practice makes writing better, and poems can come from anywhere—a phrase, a word, place, occupations, stories, overheard conversation, etc. to use as a prompt. Read a poem, write a poem. Figure out what makes it tick or not. Use words from it, answer it, refute it, jack up the title and drive a new poem under it. Make your poem as clear as you can, and in your own voice. Make use of the senses and metaphors. Write from experience that connects you to the greater world. Try writing in form, humor, try lots of things—it’s all practice. Use allusion, history, science, philosophy, your occupation or avocation, any interesting fact in a poetic way. Write with abandon and accept your failures, learn from them. Read out loud what you’ve written for a sound check. Set your hot new poem aside for a week or a month or a year and come back to it with new eyes. Revise your work, and share it with others. Be humble, listen to their suggestions/comments and decide if you can tweak your writing. I’ve written very few poems that arrived to my page fully-grown from the head of Zeus.

You’ve won three Nebraska Book Awards, most recently in 2018 for Rock • Tree • Bird, which also won the 2018 WILLA Literary Award. In what ways does Nebraska as place influence your work?

Most of my writing is grounded in place—this place, the land and its people and my surroundings—and I strive to make connections to nature and the greater world. I cannot separate my life from its place on the Great Plains, and have long been trying to work with nature in my home landscape instead of fighting it by maintaining my acre as an urban wildlife habitat. All of this influences my writing.

You served as Nebraska State Poet from 2013 to 2018. What did that role mean to you? And how has your writing life evolved in relation to that time in your career?

Being selected as the first female in a state position for poetry in 2013 was life-changing and humbling! It was a great honor for me to serve as an ambassador for writing, zig-zagging throughout the state each year, going into classrooms, libraries, community groups, and conferences, giving readings and conducting writing workshops to hundreds of Nebraska students and the general public, as well as traveling to other states. I met so many wonderful people who were appreciative and engaged in listening and/or creatively writing. It’s difficult to say whether my writing evolved from this particular experience, because I think all writers’ work grows in some way through time.

I followed two Nebraska literary giants who held lifetime terms: John Neihardt (1881-1973), designated by legislation as the Nebraska Poet Laureate in 1921 and then as Poet Laureate in Perpetuity in 1927, and William Kloefkotn (1932-2011­), selected by a committee as the first Nebraska State Poet in 1982. Before the call went out in early 2013 for nominations for a new State Poet, Humanities Nebraska, Nebraska Arts Council, and the Nebraska Library Commission formed a committee to set new criteria for the position. When writers were asked what we’d like to see in the new State Poet, I was one who said there should be term limits because there are so many wonderful writers in our state. And I am thrilled that the awesome poet Matt Mason was selected to succeed my term.

You have a bachelor’s degree in horticulture and a master’s degree in agroecology, and you’ve received the Mayor’s Landscape Conservation Award for creating an urban wildlife habitat near your home in Lincoln. In what ways does your background in these natural sciences influence your writing?

Many of my poems reflect my place on the Plains, my education, and my love for nature—native plants and wildlife—as tools for my writing. When I first started, I had a wealth of stories from my small farm/rural upbringing to use. I still write about that farm and how it shaped my life, but my writing has also been influenced by the knowledge and awareness obtained from upper education and the realization there is so much more to learn. The agricultural sciences have made me keenly aware of the importance of our natural resources such as soil, water, and ecosystems, and the creatures besides humans who depend on them. For example, the professor who taught soil science told our class, “We’re treating our soil like dirt.” I have come to believe it is our responsibility to respect nature and to work at being good stewards of the land.

What else do you find inspires or informs your writing?

What are you currently working on?

A new unpublished work in progress—a collection of poems about/for my late husband Tom: Building the Fire: Elegies & Odes (New & Selected)—with old love poems from my previous books, and new poems of loss and my journey following loss. William Faulkner once said, “The past is never dead. It’s not even past.” And so, life goes on.

Is there anything else you would like to add? 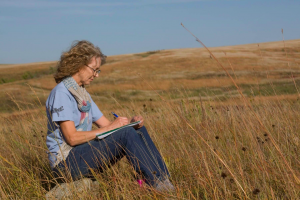 Twyla M. Hansen served a five-year term as Nebraska State Poet from 2013 to 2018, is a co-director of the website Poetry from the Plains: A Nebraska Perspective, and has conducted readings and creative writing workshops through Humanities Nebraska since 1993. Her newest book of poetry, Rock • Tree • Bird (The Backwaters Press 2017), won both the 2018 WILLA Literary Award for Poetry from Women Writing the West and the 2018 Nebraska Book Award for Poetry from the Nebraska Center for the Book. She has six previous books of poetry, and her writing is published in the Academy of American Poets (poets.org), Poetry Out Loud Anthology, Prairie Schooner, Midwest Quarterly, Organization & Environment, Encyclopedia of the Great Plains, and many more.