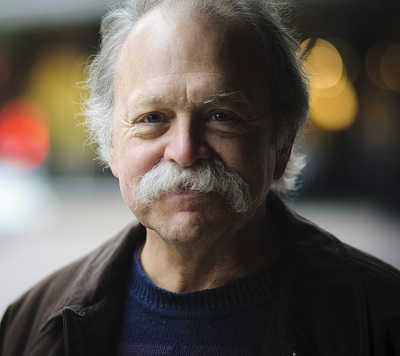 How has your family inspired your writing?

My family didn’t exactly inspire my writing as much as it provided raw material for writing. My writing is usually triggered by or suggested by interactions with people or with other creatures. If I pay attention—and I think that nearly a hundred percent of writing is paying attention—something about any interaction with another living being will give me a slightly different angle of view which presents an entryway into writing.

Where did you come up with the title It’s As Good Here As It Gets Anywhere?

The title It’s As Good Here As It Gets Anywhere is part of two lines from the penultimate poem in the collection, More News, in which the speaker of the poem comes to the realization yet again that the earth is a magnificent place to live and beauty is wherever you find it, even in Omaha, even in your own backyard.

What is the hardest thing about writing for you?

The hardest thing about writing is to have the self-discipline to devote time to it each day. There are so many distractions that compete for time and energy. Most of the distractions, such as social media, I have no use for anyway, but a big distractor for me has been politics. I have always been interested in politics but the invention of the twenty-four hour news cycle coupled with the insane turn in our politics since before the last election have combined to make politics addicting to me.

How often do you read?

I read every day though I don’t read anywhere nearly as much as I did as a younger person. Right now I’m reading The Grapes of Wrath, The Complete Ernest Hemingway Short Stories, and a collection of Gerald Stern poems, Divine Nothingness. Years ago, I found that if I read poems, I tended to write poems, and if I read prose, I tended to write prose. That sense is so strong to me that a couple times when I was younger I banned myself from reading newspapers because the language found there is so matter-of-fact it inhibits somehow the mind from making the mental leaps that must be made to write poems or creative prose. As well as poetry and fiction I like to read a bit of history and science and writing about art and writing. I am currently weaning myself off political news. I also spend a good deal of time painting abstracts.

Do you have any favorite authors?

The list of authors whose writing I admire would be long and essentially pointless because I like many different authors for many different aspects of their writing. I’m not bragging—considering I am a poet, the range of poets and fiction writers whose work I have read is abysmally small, but even at that, a list would only be a list of names unless I were to write out what it is that I found about writing or about life in each writer’s work.

When did you start writing?

I wrote a little ditty when I was a senior in high school that my cousin, who was editing the school newspaper, printed there. I wrote some mostly rhymed stuff when I was in the navy and I was lonely a lot of the time. I returned to college after the service and I was writing these little things in my notebooks besides class notes but I didn’t know what they were. I typed up a sheaf of them to give to my beginning writing-of-poetry teacher, Greg Kuzma, and he really liked them, so I realized that I was writing poems. Greg encouraged his students to read a lot of poetry—he’d bring huge stacks of these skinny books into class early on in the year—and we learned from that what poems looked like and what they could do. It was amazing to find out poems could be written by living humans in our own language! Because of writing poems, I began to become aware of the whole world as though I were a child again.

Do you feel you write better relaxed or under pressure?

I don’t know if I write better under pressure, but I think that I wrote most of my poems under pressure of some sort, in the sense that to write poems I have always had the feeling that I was stealing time away from something else in my life that I was being required to do—write a term paper or read the books on the syllabus, or go to a job to support my family. I always had the vague sense that writing poems really wasn’t important, that I should be out doing something to Save The World, or that I was somehow disappointing my parents by being a poet rather than, say, a doctor or lawyer. So there was that pressure too. It wasn’t till I was in my fifties that the artist Bill Farmer told me not to worry about it—that writing poems or creating art or Saving The World was all the same thing—we each do our part to help. 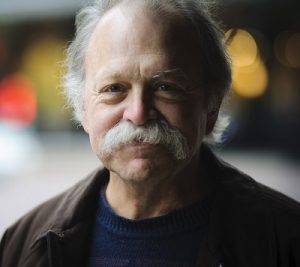 Greg founded The Backwaters Press in 1997. Awarded the Jane Geske Award from the Nebraska Library Commission in 2011, the press published a poetry anthology in 2007, Nebraska Presence, which was selected as the 2018 “One Book One Nebraska.” The press become an imprint of The University of Nebraska Press in 2019.

Author of thirteen books and chapbooks of poems, Greg was awarded two artist’s fellowships from the Nebraska Arts Council. It’s as Good Here as it Gets Anywhere (Logan House Press) was a 2017 Finalist for the High Plains Book Award. Greg and his wife, Debbie, are parents of three children, grandparents of two.