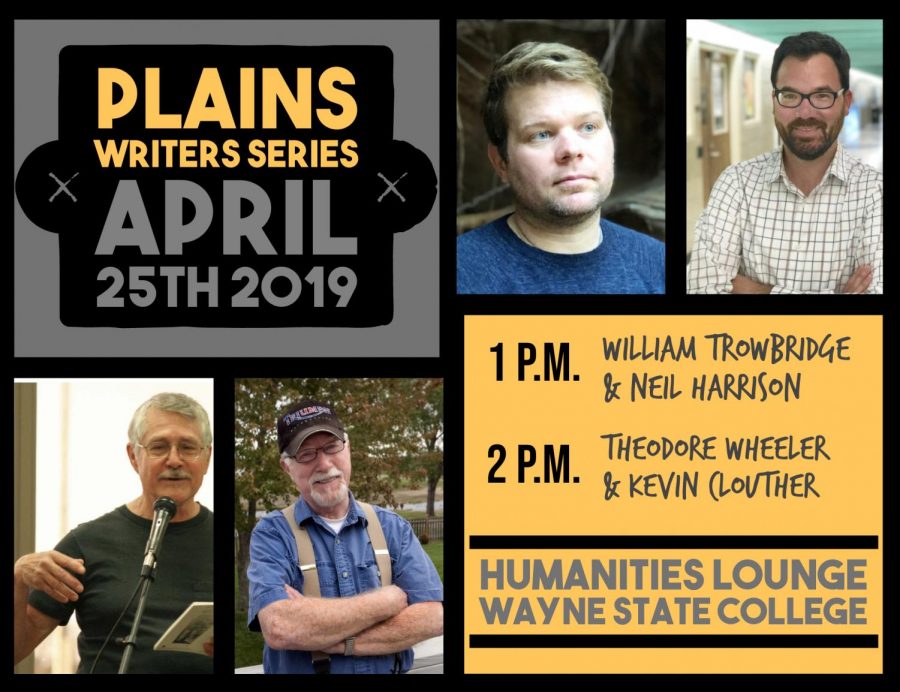 Wayne State College’s Language and Literature Department, the School of Arts and Humanities and the WSC Press are pleased to hold this spring’s Plains Writers Series on Thursday, April 25, 2019. The Plains Writers Series is held several times a year to bring attention to the prose and poetry of Great Plains writers through reading and interacting with area audiences.

This Plains Writers Series will highlight Theodore Wheeler, Kevin Clouther, William Trowbridge, and Neil Harrison. The readings will begin at 1 p.m. and 2 p.m. in the lounge on the second floor of the Humanities Building at Wayne State College. At 3 p.m. there will be a brief Q & A that will include information about publishing, UNO’s MFA program, Dundee Book Co., and Omaha Lit Fest.

Following the Plains Writers Series will be the fiction slam. The slam will be held at the Max Bar and Grill in downtown Wayne, NE starting at 7:00 p.m., with registration starting at 6:00 p.m. Slam participants need two short stories and pay a $5 registration fee. There is no preliminary round for this slam. All events are free and open to the public. For more information, please go to wscpress.com.

Theodore Wheeler is the author of two books, Kings of Broken Things (Little A, 2017) and Bad Faith (Queen’s Ferry Press, 2016), and the forthcoming novel In Our Other Lives (Little A, March 2020). His work has appeared in New Stories from the Midwest, The Southern Review, The Kenyon Review, Narrative Magazine, and Boulevard, and has been recognized with a Marianne Russo Award from Key West Literary Seminar and a fellowship from Akademie Schloss Solitude in Stuttgart, Germany. A graduate of the creative writing program at Creighton University, he teaches at the University of Nebraska at Omaha, covers a civil law beat for a national news service, co-directs Omaha Lit Fest, and sidelines as a bookseller for the Dundee Book Company roving book cart, one of the world’s smallest bookstores.

Kevin Clouther is the author of We Were Flying to Chicago: Stories. His stories have appeared in The Gettysburg Review, The Greensboro Review, Gulf Coast, The New Orleans Review, and Puerto Del Sol among other journals, and he has contributed essays to The Millions, NPR, Poets & Writers, Salon, and Tin House. He holds degrees from the University of Virginia and Iowa Writers’ Workshop and is the recipient of the Richard Yates Fiction Award and Gell Residency Award. He is an Assistant Professor at the University of Nebraska at Omaha Writer’s Workshop, where he is Program Coordinator of the MFA in Writing.

William Trowbridge’s seventh poetry collection, Vanishing Point, was published by Red Hen Press in April 2017. His eighth, a greatly  expanded collection of the poems that came out in the 2016 Red Hen graphic chapbook Oldguy: Superhero, will be out in September. He is a faculty mentor in the University of Nebraska Omaha Low-residency MFA in Writing Program and was Poet Laureate of Missouri from 2012 to 2016. For more information, see his website at wiliamtrowbridge.net.

Neil Harrison’s poetry collections are In a River of Wind, Into the River Canyon at Dusk, Back in the Animal Kingdom, and Where the Waters Take You (Pinyon Publishing, 2018). He earned the MFA in Fiction from Vermont College in 2001, and his stories have appeared most recently in Pinyon Review and Panoplyzine. He is a former instructor of English and Creative Writing at Wayne State College in Wayne and at Northeast Community College in Norfolk, Nebraska, where he lives with his third drahthaar, the Happy Dog.