My Shtetl by Robert Cooperman 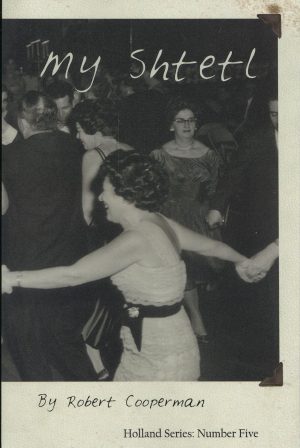 Open to any poem in Robert Cooperman’s My Shtetl and be so delighted you won’t want to put the book down. Much more comes alive here than one man s childhood Brooklyn neighborhood, its Yiddish flavors, its tales of a family of American Jews who don t look, no different from real folks. He may have been a nebbish in his youth, tripped up by kids so cool, they had only to look at him, and he’d tumble to the ground, but as this deeply engaging collection demonstrates, Robert Cooperman became a poet with the talent and compassion to deliver our recognizable world and its people in poems rich in detail and consequence.

Bursting with marvelous incongruities Keats poetry saving the day at a post office, a woman concealing a hunted Jew and thanking him for paying her entrance fee to Christian heaven, cheerleaders urging violence in Yiddish–Cooperman’s poems embody, in supremely sustaining language, the wisdom of survival: They tried to kill us, they failed; let’s eat.

Robert Cooperman has a great gift for telling stories in his poems. In MY SHTETL he draws from the richness of the American Jewish heritage to create a unified and beautiful poem tapestry. He avoids the sentimental but is not afraid of feeling. His clarity makes each poem memorable and the entire collection worth reading, and savoring, again and again.